1. Three-dimensional computer models allow researchers to study the complex motions that take place within a lake, and to play “what-if” scenarios to better understand the impacts of changing conditions. In recent years, our models of Lake Tahoe have progressed from being able to resolve features down to 200 m (660 feet) to only 20 m (66 feet). When coupled with biological models and particle tracking models, this technology is paving the way for better understanding of lakes around the world

2. Our three-dimensional model Si3D is currently being used to understand the transport of invasive species such as Asian clam larvae, pathogens and other contaminants within Lake Tahoe. The complex patterns produced by the interactions of the wind, the complex shape of Lake Tahoe and the earth’s rotation are key to knowing where contaminants are likely to build up or transported to.

3. The team of researchers include Dr. Francisco Rueda, Andrea Hoyer and Mario Acosta at the University of Granada, Spain. Funding for our modeling studies has come from SNPLMA, the National Science Foundation, IVGID and NDEP.

This work was partially supported by an EPA/NSF sponsored Water and Watersheds grant through the National Center of  Environmental Research and Quality Assurance (R826282), the U.S. EPA–sponsored (R819658 and R825433) Center for Ecological Health Research at U.C. Davis, and grants 01‐174‐160‐0 and 01‐175‐160‐0 from the Lahontan Regional Water Quality Control Board.

Measuring the water current at a single point provides valuable data – but only at that point. What is often important to know is how water moves all around the lake, and where it would carry pollutants or invasive species once they were in the lake. Water current drifters do that. TERC has used surface drifters attached to underwater sails (or drogues) to measure the paths that they take when carried solely by currents. A GPS unit in the drifter keeps track of the ever changing position, and in recent versions that data is sent to us in real-time via satellite.

The drifter studies to date have revealed a lot of new information about Lake Tahoe. We know that the circulation is dominated by two main eddies or gyres. The one in north travels counterclockwise, while the one in the south moves clockwise. Smaller gyres occur at the edges of these major gyres, and they disappear and reappear depending on the winds. The first hint that Asian clams could travel across the lake from east to west in less than a day was revealed by a drogue study. Our interest is now on understanding the small gyres that run along the nearshore regions of the lake.

Funding for this research has spanned many years, with numerous sources. Funders include the US EPA, East Bay Municipal Utility District (EBMUD), SNPLMA, the UC CITRIS Program and private donors. Our newest collaboration is with the students of the Tahoe Expedition Academy in King’s Beach. Together we will be monitoring the currents off the north shore of Lake Tahoe and developing a web application to show the current movements.

The surface circulation of Lake Tahoe can be shown using colored markers to acts as tracers. The velocities that move the markers are produced by the three-dimensional hydrodynamic model. 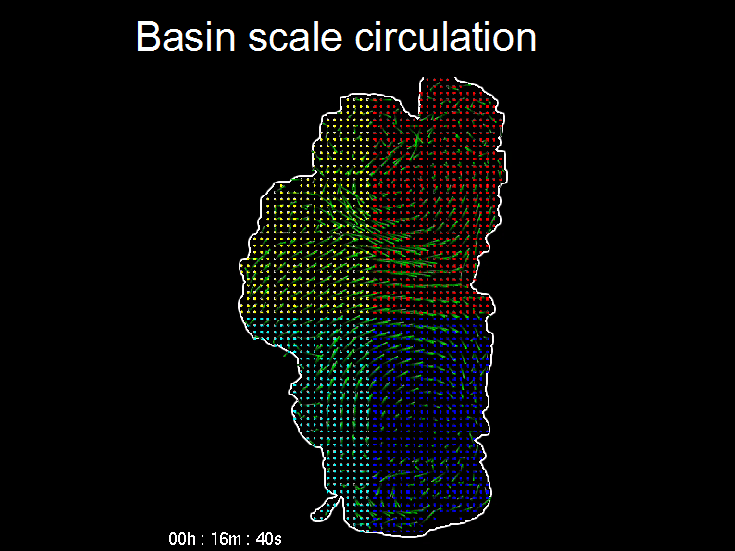