State of the Lake 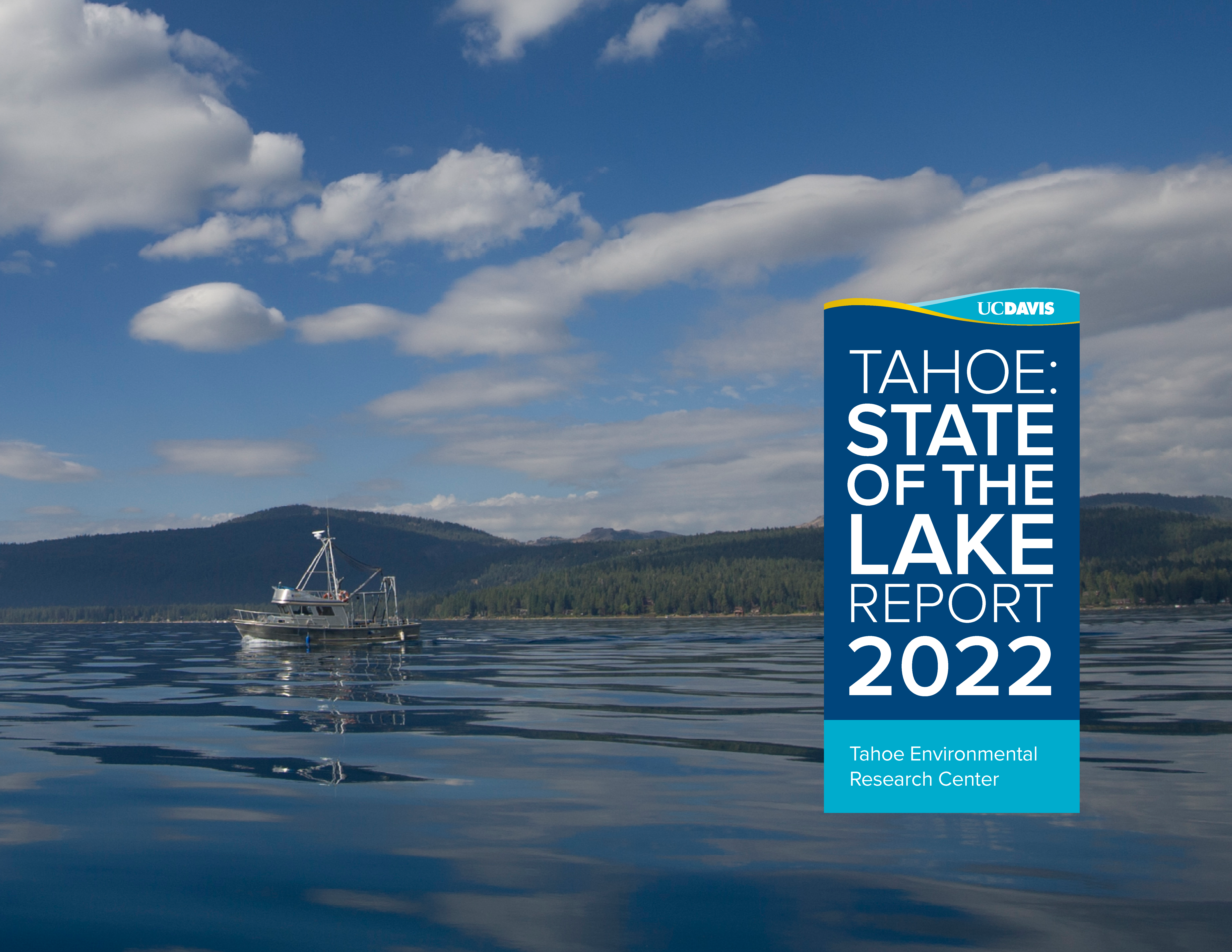 The UC Davis Tahoe Environmental Research Center, or TERC, today released its annual Tahoe: State of the Lake Report. The report informs nonscientists about important factors affecting the health of Lake Tahoe and provides the scientific underpinnings for restoration and management decisions within the Lake Tahoe Basin.

The report summarizes data collected during 2021 in the context of the long-term record of research at Lake Tahoe. UC Davis researchers have continuously monitored the lake since 1968.

TERC director Geoffrey Schladow, professor of civil and environmental engineering at UC Davis, will share highlights of the report during a live presentation and webinar today, July 28, at 6 p.m. Event registration is at tahoe.ucdavis.edu/events.

The report describes the collapse of the zooplankton and Mysis shrimp populations; an abrupt change in the phytoplankton community; and the extent of algal growth impacting large sections of the Tahoe shoreline.

“Any one of these changes would be a big deal in a single year,” Schladow said. “All three occurring at once is particularly alarming and a huge opportunity to learn lessons that can be used to inform future management.”

Zooplankton numbers plummeted in the past year. These tiny aquatic organisms are an important part of the lake’s food web and help regulate algae concentrations. The decline of a non-native zooplankton, the Mysis shrimp, marks an opportunity to better understand lake clarity. (The Tahoe clarity report was released earlier this month.)

Mysis shrimp were introduced to the lake about 50 years ago, feasting on native Daphnia and other zooplankton that help clean the water. After Mysis abundance declined in Emerald Bay between 2011 and 2014, Daphnia—and water clarity—dramatically increased, resulting in larger kokanee salmon. Mysis later returned to the bay, and the process reversed itself. TERC researchers expect a similar episode to play out in Lake Tahoe itself over the next 1 to 4 years, with Mysis numbers already at extremely low levels.

To leverage this natural experiment underway, the report calls for more complete monitoring to understand the interplay among zooplankton, phytoplankton and clarity.

“Eventually, Mysis will return,” the report states. “The real question is whether the absence of Mysis from Lake Tahoe will help restore clarity and, if so, is the deliberate removal of Mysis in the future warranted.”

Meanwhile, phytoplankton forming the base of the food web are also changing their distribution at an unprecedented rate. In 2021, phytoplankton moved closer to the surface as summer progressed. The shift may be due to reduced sunlight and UV radiation during wildfire smoke events.

The rate of algal growth, or “primary productivity,” has increased six-fold over the past 50 years. The abundance of floating algae also increased by 300 percent in the past year, attaining an all-time high annual value in 2021.

Nearshore algal blooms are a growing threat, impacting areas of the lake where the greatest numbers of people congregate. Researchers used aerial imagery to capture for the first time the full extent of the periphyton bloom along the lake’s northwest side.

For the first time on record, the lake’s dominant alga was the cyanobacteria Leptolyngbya, a species favored by the high nitrogen present in wildfire smoke.

In 2021, fine particle concentrations, which greatly impact clarity, were the highest on record. The wet year of 2017 brought a large increase in fine particles to Lake Tahoe from local streams. High average concentrations have continued each year since, despite some extremely dry years. Particles from wildfires in 2021 may be a source. Researchers continue to study the drivers and impacts of fine particles.

Meanwhile, nitrogen and phosphorous loads from the Upper Truckee River were lowest on record in 2021.

Climate change is evident in nearly all the long-term meteorological trends, including rising air temperatures and a declining snow pack. In 2021, monthly average temperatures were warmer than the long-term average and the past two years. The year also brought the warmest June and July since these measurements started in 2010.

With less than half the long-term average precipitation, 2021 was the third driest year on record. The report said it is “almost certain” the lake will fall below its natural rim and stop flowing to the Truckee River this summer.

Tahoe State of the Lake Report 2022

Download a PDF of the entire report (5.3 MB) or visit the individual chapters below:

Historic State of the Lake Reports

Previous State of the Lake Reports are available here.