The Introduction of Mysid Shrimp

From 1963-1965, the California and Nevada Departments of Fish and Game intentionally introduced the non-native Mysid shrimp (Mysis diluviana) into Lake Tahoe and Emerald Bay. At the time, it was believed that the establishment of a Mysid population would provide a plentiful food supply substantially increasing the growth and survival of lake trout (Oncorhynchus nerka), which was Tahoe’s primary sport fish. While the Mysid shrimp did become established by 1971, they did not successfully supplement the food supply for sport fishes and instead had unexpected negative impacts on the lake that you can still see today.

The failure of the Mysid shrimp to successfully supplement the food supply for Tahoe’s game fish was primarily due to the lack of understanding of two key factors; Mysid behavior and diet. Mysid shrimp are sensitive to light and given Lake Tahoe’s famously clear waters, they chose to spend their days on the dark lake bottom. Most game fish in Lake Tahoe are sight feeders thus making Mysid shrimp mostly unavailable for consumption. During the night, the Mysid shrimp undertake an enormous vertical migration of up to 500m from the depths of Lake Tahoe in order to find food. While juvenile Mysids mainly subsist on algae and detritus, adults are ferocious consumers of zooplankton. By 1971, two of Lake Tahoe’s most prolific zooplankton, Daphnia and Bosmina, had disappeared from the lake just 8 years after the first introduction of Mysid shrimp. The loss of these zooplankton lead to a dramatic restructuring of Lake Tahoe’s food web and contributed to the rapid decline of clarity.

In 2011, TERC researchers observed an incredible incident in the waters of Emerald Bay. Mysids had all but disappeared from the bay and within 2 years, Daphnia and Bosmina reappeared in large numbers and water clarity within the bay almost doubled, surpassing even Lake Tahoe’s clarity at the time. This occurrence presented two intriguing questions:

In a five-year study, funded by private donors, TERC researchers confirmed a link between Mysid shrimp and their negative impacts on lake clarity. Daphnia and Bosmina are very efficient grazers, consuming fine particles and algae from the water column, turning them into fecal pellets, which sink to the bottom of the lake. The lack of predation pressure from Mysid shrimp during the study period allowed for Daphnia to return in large numbers and consume enough fine particles and algae to double water clarity in Emerald Bay.

In 2018, TERC researchers began a two-year project to answer this question. The project is being funded by the California Tahoe Conservancy and the Nevada Division of Environmental Protection. It entails locating and quantifying Mysid shrimp followed by the manual harvest of a target number of shrimp in Emerald Bay. TERC’s largest research vessel, the R/V John Le Conte, has been fitted with specialty instrumentation and equipment for the project. Researchers and graduate students are using a Biosonics split beam echo-sounder to determine, in real-time, where Mysids are feeding in the water column. Once researchers have honed in on the depth with the highest density of Mysids, a large custom designed trawl is deployed off the rear of the boat and the Mysids are removed. All of this work must be done at night when the Mysids come up from the lake bottom to feed resulting in some long and chilly nights for the TERC field team. Updates on the project will be posted to this webpage and in TERC’s quarterly newsletter.

The Graduate School of Management at UC Davis has proposed a potential lucrative use for Mysis shrimp harvested from Lake Tahoe. Check out their blog for more information! 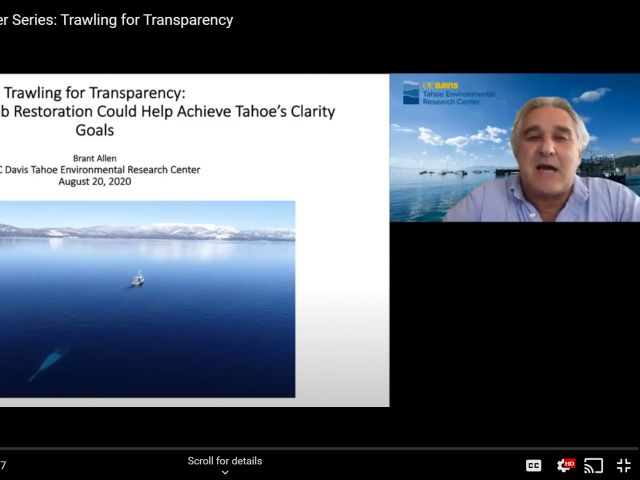 Watch them along with other TERC videos now