TERC researchers monitor levels of attached algae (periphyton) growth around the lake five times per year. Periphyton is collected from submerged rocks at 9 routine sites while snorkeling and chlorophyll content is measured to estimate algal biomass. An additional 40 sites are visited during the heaviest spring growth to provide more detailed information on distribution each year.

Excessive attached algae biomass coats the rocks in the spring in many areas around the lake.  This algae may appear as thick, slimy, furry, or stringy coatings of green, tan, or light-colored. This algae is found on rocks and boulders, as well as on boat hulls, piers and other surfaces in the nearshore. When this material dies and breaks free, small patches of material may accumulate on the lake surface and in some areas wash up onshore, fouling beaches. Nearshore periphyton can adversely impact the aesthetic, beneficial use of the shore zone in areas where thick growth develops. As with phytoplankton, nutrient availability is thought to play a large role in promoting periphyton growth. The amount of periphyton biomass can reflect local nutrient loading and also be affected by long-term environmental changes. The purpose of the periphyton quantification task is to assess biomass levels of nearshore attached algae (periphyton) around the lake.  This monitoring data is used to model periphyton growth conditions at Tahoe and will be used to evaluate management options. 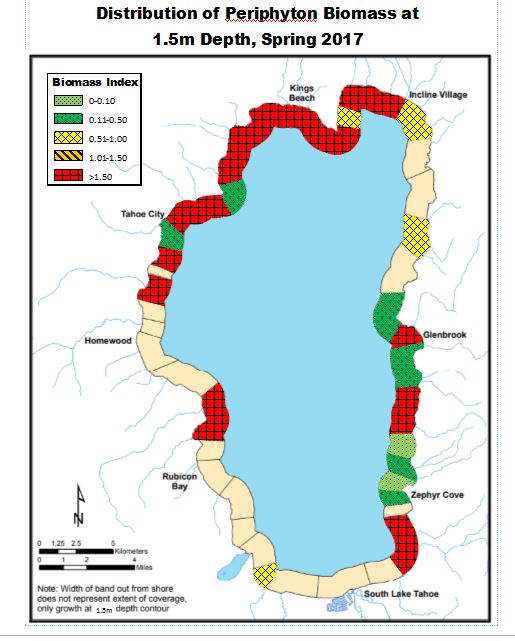