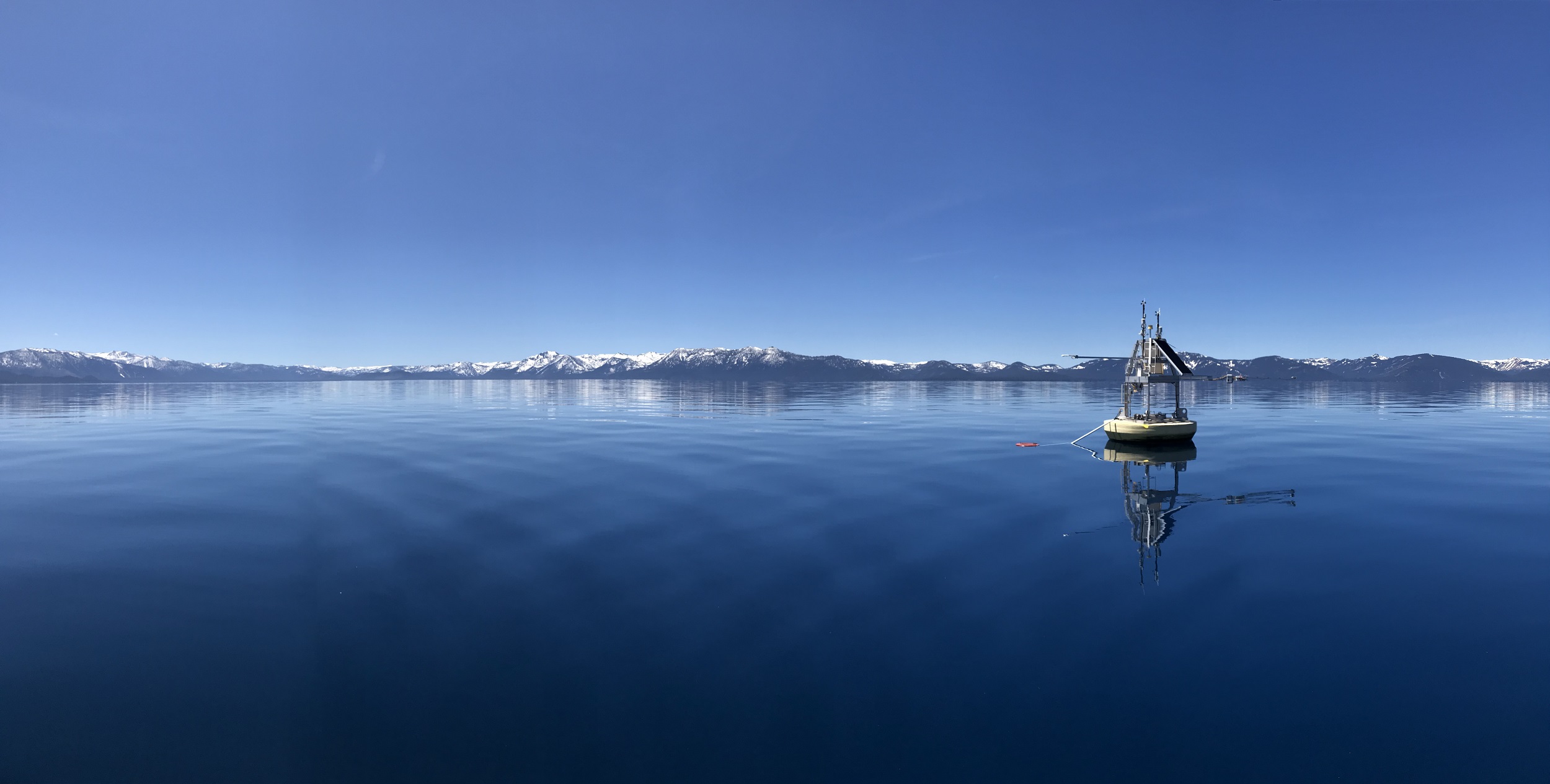 Lake Tahoe’s water clarity measurements, which are indicators of the health of the watershed, averaged 62.9 feet through 2020, the UC Davis Tahoe Environmental Research Center and the Tahoe Regional Planning Agency announced today.

Lake Tahoe’s clarity peaked in February 2020 when it was deeper than 80 feet. It was at its lowest in mid-May when it measured at slightly more than 50 feet. These readings were within the average range of the last decade. Average clarity in 2020 was just slightly better than the previous year’s average of 62.7 feet.

Clarity has been measured by UC Davis researchers since the 1960s as the depth to which a 10‐inch white disk, called a Secchi disk, remains visible when lowered through the water. Because lake clarity measurements vary from day to day and year to year, managers and scientists remain focused on long‐ term trends as an indicator of the lake’s health. Measurements show Lake Tahoe’s annual clarity has plateaued over the past 20 years. Despite this progress, summer clarity continues to decline by over a half‐foot per year.

“While there is a good understanding of how fine clay particles and tiny algal cells reduce clarity, the biggest challenges are in reducing their presence in the surface water,” said Geoffrey Schladow, UC Davis’ Tahoe Environmental Research Center director. “Here climate change, and in particular the warming of the surface water, is exerting an undue influence.”

A recent review of clarity data by the Tahoe Science Advisory Council reaffirmed the understanding of main drivers of clarity loss. The council commissioned a panel of scientists from regional academic and government research institutions which concluded that fine sediment particles and algae continue to be the dominant variables affecting Tahoe’s clarity. They recommended that water quality agencies continue to focus on reducing fine sediment and nutrient loads.

Past UC Davis research and the council’s report pointed to several other factors affecting Tahoe’s famed clarity. Climate change is altering precipitation and snowmelt patterns, increasing the temperature of the lake, and impeding deep lake mixing. Such mixing in late winter can bring cold, clear water up from deep in the lake which improves clarity. In 2020, the mixing was extremely shallow and contributed to the lack of improvement.

“This council report demonstrates the value of continued investment and innovation in sustained monitoring and assessment at Tahoe.”

How is clarity measured and why?

Lake Tahoe is known around the world for its water clarity and cobalt blue color. Historically, clarity averaged about 100 feet. A development boom in the mid‐20th century brought about unintended environmental impacts, including reduction of the lake’s pristine clarity. For decades, researchers have been documenting changes in the lake and the research has informed policymakers and stakeholders on management strategies to protect the lake and stabilize its decline in clarity.

The states of California and Nevada, which share Lake Tahoe, are actively working to restore average lake clarity to its historic 100 feet. Under the Clean Water Act, the Lake Tahoe Total Maximum Daily Load is a science‐based plan to reduce the amount of fine sediment and nutrients entering the lake by reducing pollution through improved roadway maintenance and erosion control on roadways and private properties.

More than 80 organizations, including government agencies, non‐profits, and research institutions, are working collaboratively with scientists to improve Lake Tahoe’s water clarity and ecological health under the Lake Tahoe Environmental Improvement Program, or EIP, which is one of the most comprehensive, landscape‐scale restoration programs in the nation.

“Regaining Lake Tahoe’s water clarity is a commitment we all share, and together we are making a difference,” said Joanne S. Marchetta, executive director of the Tahoe Regional Planning Agency. “While the long‐term clarity trend shows we are on the right track, we need to be vigilant about external factors and the role climate change and other threats are playing.”

Lake Tahoe is known around the world for its famed water clarity, eliciting awe from millions of visitors each year. UC Davis researchers have been monitoring the changes in lake clarity for the past 50 years using a Secchi disk (the white dinner plate). From the late 1960's through the turn of the century, there was a decline in clarity brought about by increased algae growth and the presence of very fine particles. Over the past decade we have seen the rate of clarity decline ease with winter clarity actually improving. Using technology beyond the dinner plate, researchers continue to refine their understanding of lake physics and ecology to determine the cause of annual clarity change, enabling management agencies to focus on the most pressing issues effecting Tahoe's clarity.